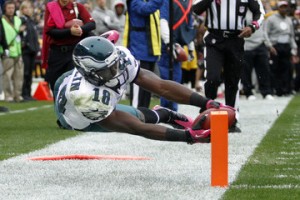 We all know where we were when we heard the news this weekend. Jeremy Maclin went down during training camp, with no one touching him. Any savvy football fan knows there is nothing worse than a football player getting injured without being touched. We already knew before the official word came down, Maclin had torn his ACL and was done for the season.

It wouldn’t be an Eagles offseason without a major participator going down with a season ending injury. Last year it was Jason Peters and who can forget Stewart Bradley at Eagles fight night a few years ago (back when we thought he would be good.) And we always seems to be holding our breath whenever Vick or McNabb had the ball during the preseason.

Maclin appeared ready to become a top level NFL wide receiver under Chip Kelly. They seem liked a match that went together like sunbutter and jelly (I have a son who’s allergic to peanuts, so it’s sunbutter in the Couch House.) However, as bad as losing Maclin is; receiver/tight end appears to be one of the deepest positions on the team this year. The injury won’t be devastating as Peters’ injury last year.

The Eagles have plenty of internal options. I have always been a big Avant supporter, even after his hands were less than stellar at the end of last year. Damaris Johnson has a major opportunity to step up here, and could finish the season as the number three, two or wouldn’t even surprise me to see him as the Eagles number one receiver. There’s no reason for the Eagles go outside the organization, since they seem set with their top three wide receivers, but they also have a plethora of players including Riley Cooper, Arrelious Benn out of Tampa, rookie Russel Shepard as well as tight ends Brent Celek, Zach Ertz, and James Casey.

(Totally irrelevant note:  It’s been awhile since I’ve written, and I’m apparently trying to find as many ways as possible to spell “receiver” in this post. God bless spell check.)

Maclin’s attitude post injury has been very positive, and I think we Eagles fan should follow his lead. He is a major loss to the team, but it is one that the team can recover from. It should still be an exciting year for the Eagles, with Chip Kelly having just one less toy to play with.

A man in search of a mission at the age of 40.
View all posts by Bill →
This entry was posted in Uncategorized. Bookmark the permalink.